It was already morning when it dawned on us that we would no longer be able to see the katala (Philippine Cockatoo) on this trip. A wooden 2 storey house on our back, on the left was a structure made for cooking copras while everywhere was coconut trees equidistant to each other standing on a blanket of grass. Dog barks were on our background while the morning breeze swept through. 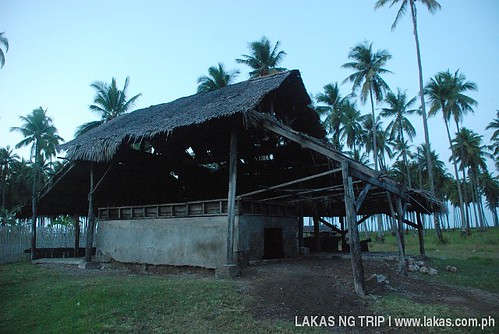 We no longer had the chance to see the Philippine Cockatoo. At least for this trip.

We quickly moved on. Breathing the fresh air and slowly internalized the slow way of life of Borbon in the municipality of Narra, Palawan.

There was this unique towering coconut tree about 150 meters away from the house. All the other coconut trees around it were cut but its uniqueness made it survive. From afar it seems flatly wobbling. When I arrived below it was more like twirling than wobbling. 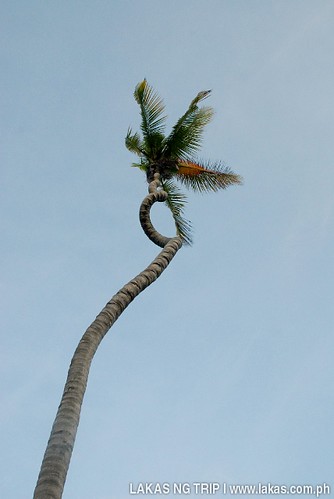 Then I went back to where Dong Ho was and we started walking towards the beach.

It was still about 400 meters away from the beach. The houses had varying distance between them, from 25 meters to more than 300 meters. Most of them had lawns that people could run around. One even had a miniature kubo as a playground. 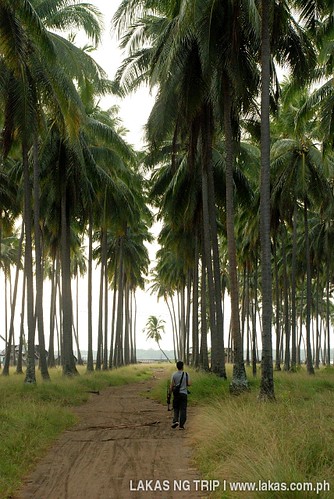 Dong Ho walking to the beach 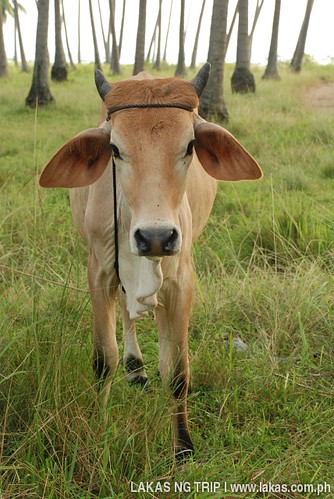 Cow below the coconut trees 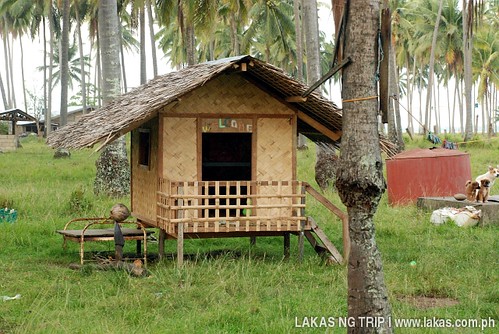 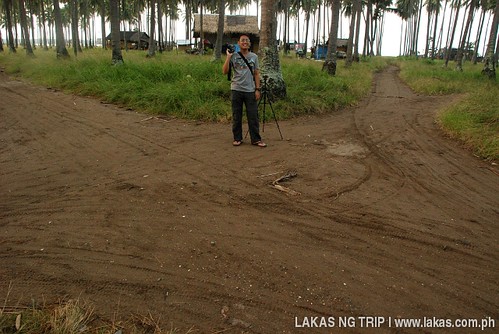 Dong Ho and the road fork

It was 6:25 AM and we walked further nearing the beach. The green grass were still there but it was thinner. Groups of people were lined up with their motorcycles and were talking to each other while waiting for something. 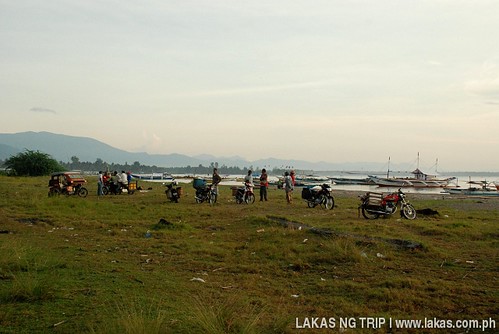 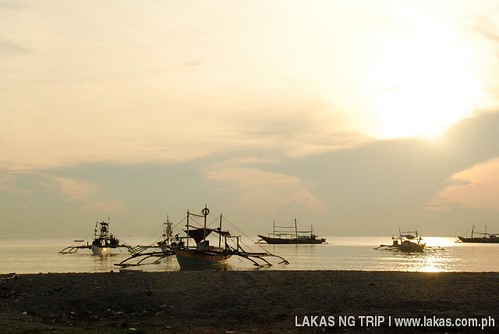 We decided to approach one group and asked what they were waiting for. They said for the fishing boats to arrive because they were buying the fishes. They were an accommodating bunch.

One of us sat on one of the sidecars of the motorbikes and a jolly man full of optimism and a smiling face passed by carrying a styrofoam container. He was selling puto and something else that were golden brown that he said were made from coconuts. If I remember correctly, it was sold at around 10 to 20 Pesos per pack of 3 pieces. 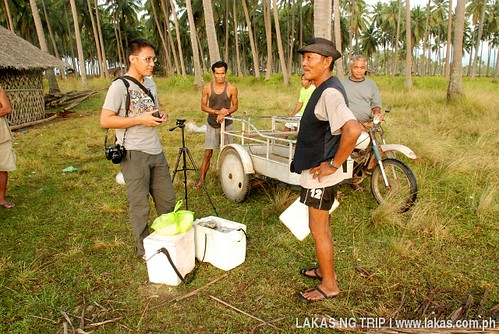 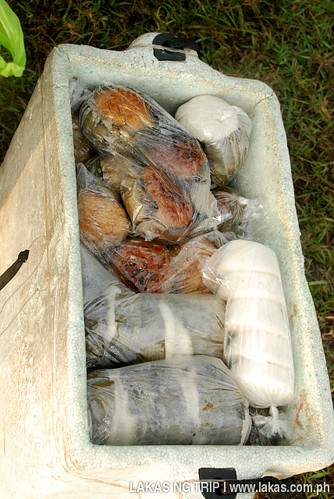 When the boats arrived, we politely said goodbye as we do not want to disturb them from their transactions.

We proceeded walking by the beach passing by a stream and a kubo with lots of bobo (cage used for catching fish). 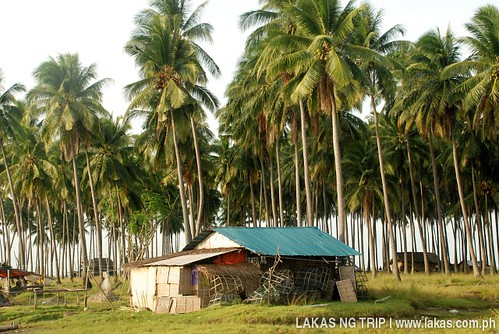 House with lots of fish cages

There were elevated horizontal bamboo poles covered with a black net used for drying fish. 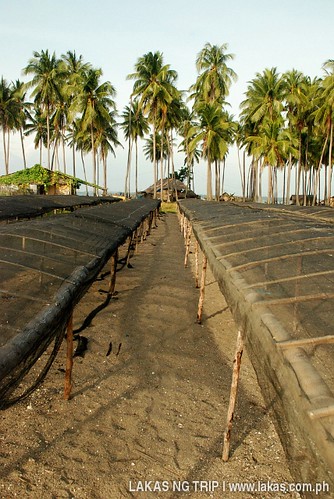 We proceeded along the beach until we reached the old port before the new Panacan Port to ride a tricycle away. 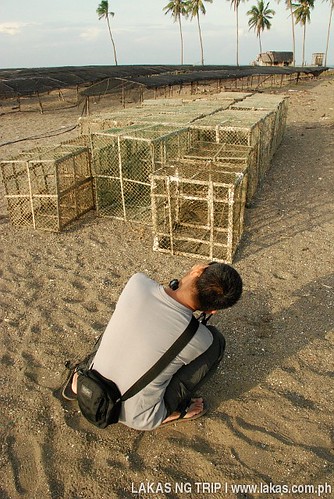 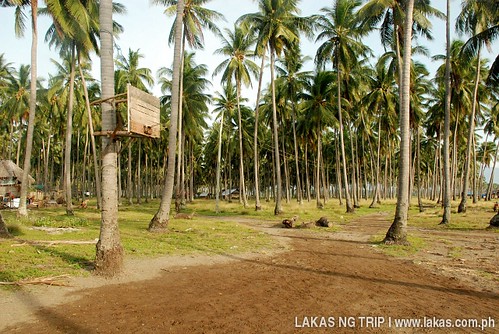 We’ve been travelling for 3 days. I came from the municipality that would take me two 2.5 to 3 hour van rides away just to get to Narra. Dong Ho came from Manila which costs a plane ticket. If reason was to persist the situation was disappointing. But travel is like life, you never get everything you want, you’ll just have to appreciate what’s there and make the best out of it.

Yes, Borbon was one of the best places on this trip.

How to get to Borbon and its beach

Ride a van or bus going to South of Palawan (i.e. Rio Tuba, Brooke’s Point, Quezon) from San Jose Terminal in Puerto Princesa. Tell the driver that you are going to Narra to Panacan Port. Van fare is 150 Pesos/person and Bus fare is 152 Pesos/person. Estimated Travel Time for the van is 1 hour and 30 minutes.

On the road going to Panacan Port or at the Narra Town Proper, you can ride a tricycle and say that you are headed to Borbon Beach. Fare is around 20 to 30 Pesos per person depending on where you are coming from. Note that Borbon is not on the usual tricycle route so you may have to hire the tricycle to bring you there.