Lately, there has been a talk around town that a new bigger van was passing by the National Highway to transport people from Puerto Princesa to El Nido and vice versa. When I asked what was the name of the operator, the locals would say Daytripper. 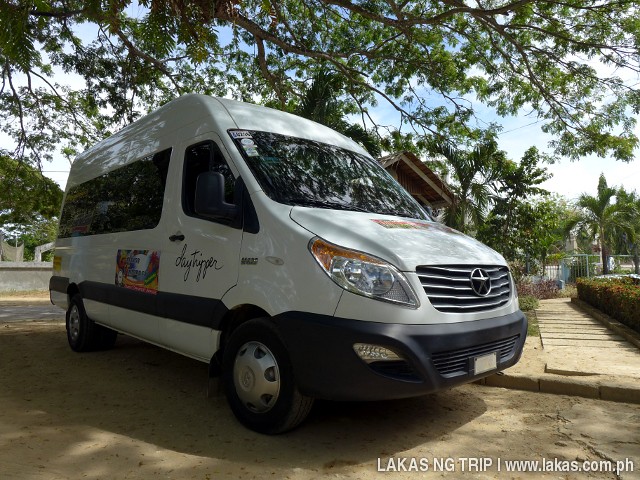 I called some of my friends on their way to El Nido and frankly after the call I had a I-badly-need-a-vacation mood! Unlike my first visit to El Nido with a tight budget, I want this trip to be a relaxing rest and recreation. Go as comfortable as possible. Eat pizza, pasta and sisig since I rarely had any of those here in the rural areas. Sleep in an aircon room. And get a comfortable ride to El Nido and Daytripper was perfect.

I went to the Daytripper website (www.DaytripperPalawan.com) and checked if their Executive Coach (the big van) was running on the same day and quickly reserved a slot. Thinking back, I think it was the right decision since if I ride the public transportation to El Nido it would most likely be full and cramped due to the Holy Week long weekend here in the Philippines.

The van arrived on time on our agreed meeting place. The driver introduced himself as Manong Oscar, which we will call the captain of our Executive Coach, and guided me on my sit.

I loved how spacious the inside of the Daytripper’s Executive Coach was. I can actually stand up straight inside given that I am 5 feet and 11 inches in height. 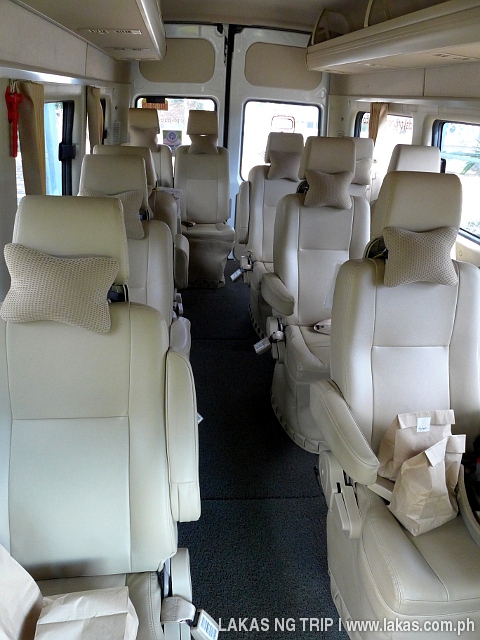 Inside the Executive Coach

There’s enough comfortable space between the seats so that my knees would not hit the back of the seat in front. Perfect for big people like foreign travellers. 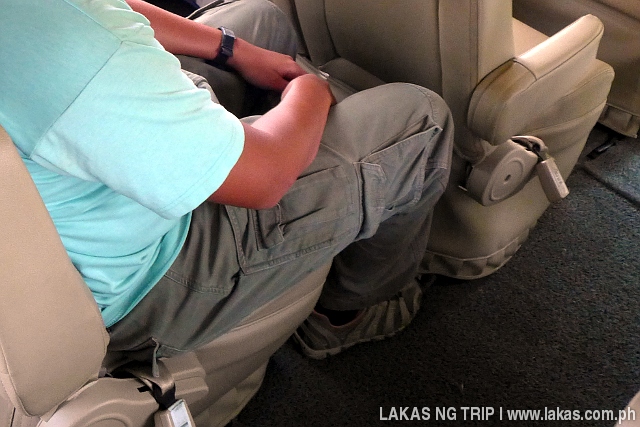 There’s an overhead compartment for bags and luggages.

The whole van was generally clean.

I was given my “loot” bag which contained a bottle of water, two pieces of bananas and banana chips. It also included their feedback form so they could assess whether customers are happy or not and what they can improve on. 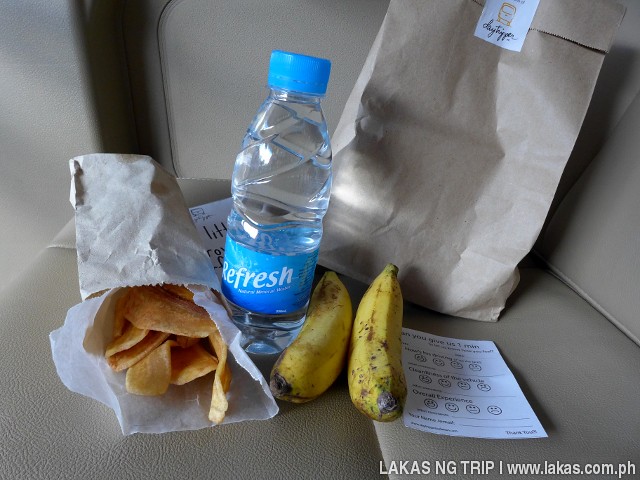 Food for the road

If you’re not used to traveling on the road and suddenly becomes dizzy and your breakfast suddenly decided to go back the way it came from, then there’s The Little Brown Barf Bag to the rescue. 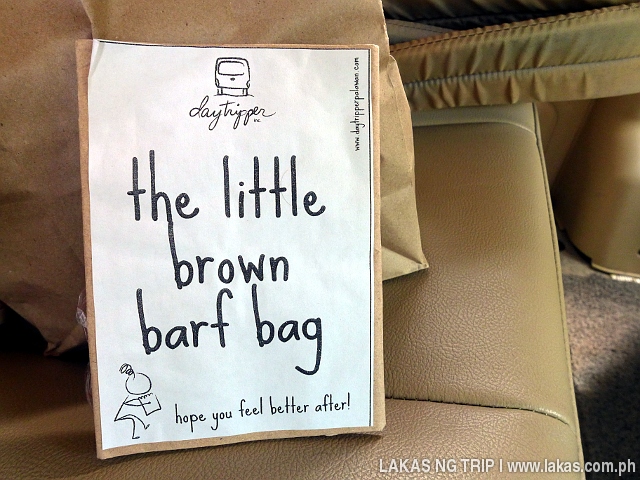 Usually when I ride a bus or van going to different parts of Palawan the transportations are so cramped up that seatbelts could no longer be used. But I’m glad that the seats are well spaced apart for me to be able to use the seatbelt.

Another thing I liked about the ride was the volume of the music. It had the perfect amount of decibels for me to be able to chat up with other passengers without it interfering with my ability to hear the voice of whom I was speaking with. When I was asleep the softness of the volume did not wake me up from dreamland. Yet when I was awake I could still enjoy the music. 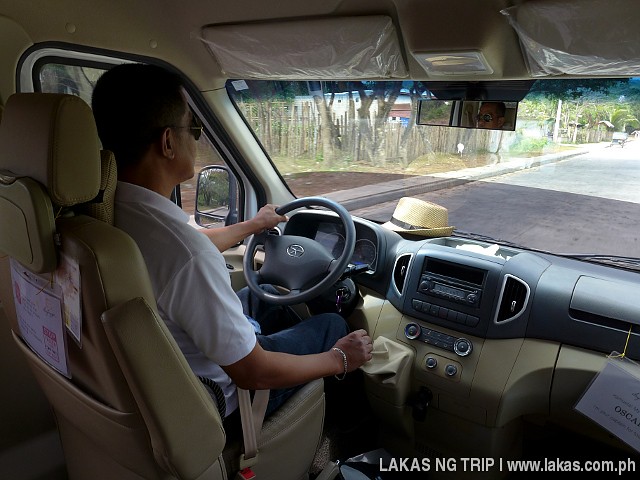 Captain Oscar while he was driving.

Every time we had a stopover our captain would announce that we are having a stopover and tells us that we could do some stretching outside, eat or take a leak. I hate it when I commute to new locations on a van/bus and they would pull over and not announce that we are having a stopover for food, a time for the comfort room and the occasional stretch your legs outside. Usually passengers do not know what to do when that happens. That’s why I’m really glad that for every stopover the captain would announce what we could do. 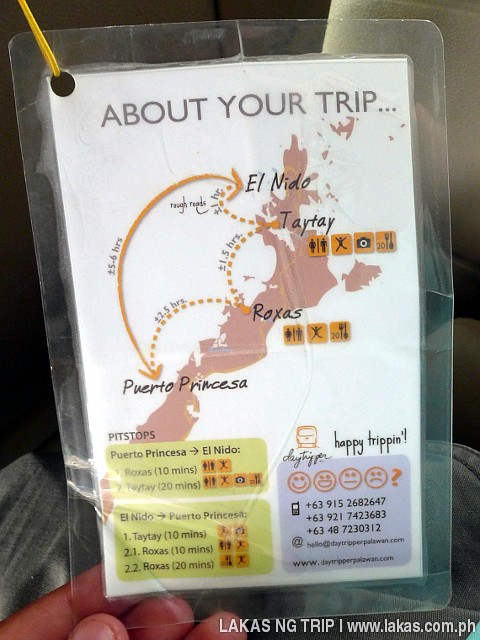 Something to guide me on the trip

This trip was actually my fourth time in El Nido. For the first 3 trips to El Nido there was this one view near the town of El Nido that I’ve always wanted to take a picture because of the magnificent view. I was thinking of asking Manong Oscar to do a quick stop there but quickly removed the idea since it would be unfair to other passengers. I was surprised when we stopped on the very spot I wanted to take a picture with. Manong Oscar told us that we could take a picture there for a quick moment before proceeding to the town proper. Yahoo! 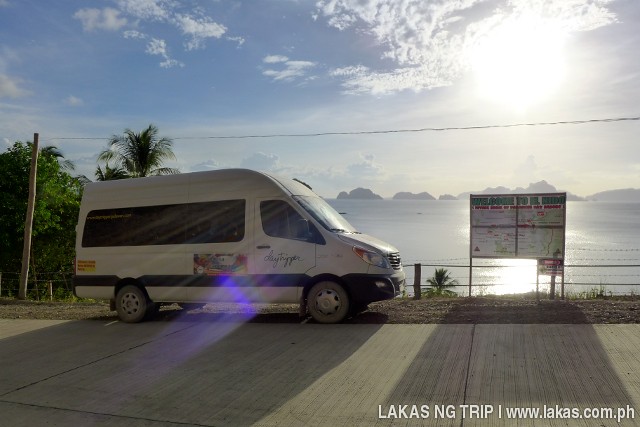 Overall, I really loved the ride with Daytripper and would recommend it to anyone who has an extra budget who will be going to El Nido from Puerto Princesa or vice versa. 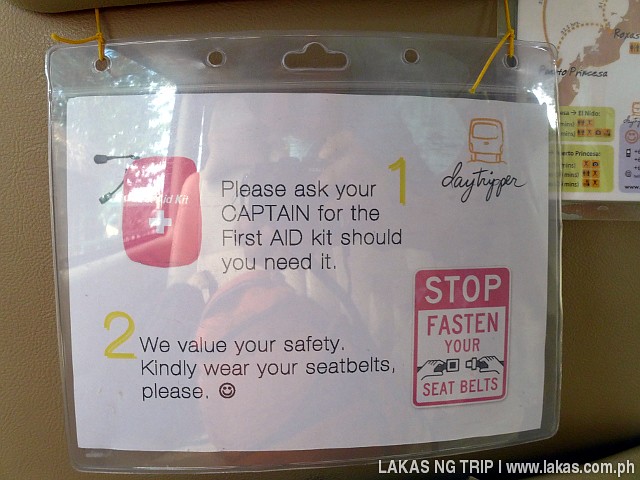 Book now as they get fully booked fast. To book click here DaytripperPalawan.com/booking/.