It was the day after we trekked to Gomot Falls at the municipality of Cajidiocan in Sibuyan Island, Romblon. The day when Marky and Pam spent a whole day riding on top of a jeep, a ferry, then a jeep again and another ferry again to separate their adventures from us, as they needed to be back in Manila. We (Dazl and I) watched the yearly float festival of different baranggays of Cajidiocan. Dazl decided that we should proceed to travel to the municipality of San Fernando after her afternoon nap.

When 4PM finally came, we were now looking for a tricycle to take us to San Fernando. 50 minutes and 80 Pesos/person butt numbing tricycle ride passing by rough roads beside small cliffs and the sea had passed before we arrived at the small public market of San Fernando. 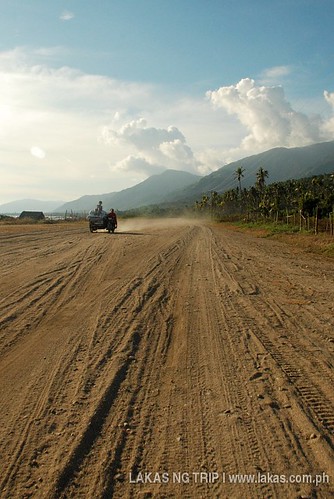 Road to San Fernando from Cajidiocan

First mission was to find a lodge and there was one in town, Sea Breeze Inn. (Details posted at the end of this post)

After setting our stuff on our respective individual rooms, we decided to take a stroll around town and ask the locals on what the place has to offer. To gather some details too.

The locals told us 4 places we could visit from the town proper. First is Cresta de Gallo Island, an island about an hour boat ride away from the town that offers sand beaches, rocks and a simple life in the island. Second, third and fourth are Busay Falls, Cantingas River Resort and Dagubdob Picnic Grove, which are freshwater adventures of different levels.

The first one (Cresta de Gallo Island) we would need to pay 2,500 Pesos for a maximum of 6 pax per boat roundtrip to Cresta de Gallo, which was in no-way could our budget cover such an expense. The other 3 was only a 700 Peso tricycle ride away, so we decided to concentrate our next day for the fresh water adventures.

We then proceeded to the port where we heard that there’s a boat the ferries people from here to Roxas City, Capiz and vice versa. We were lucky as the boats were there and the crew were doing maintenance work on the boat. We asked questions, we got details. (Detils posted at the end of this post) 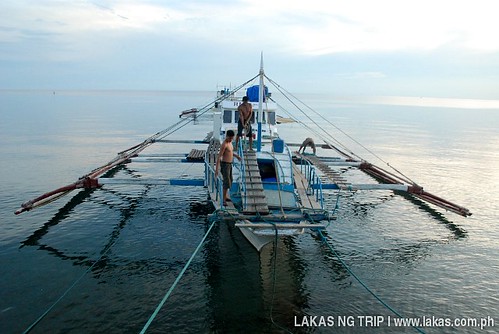 The port was simple, a concrete bridge that does not connect on another land on the other side. Shorter than most concrete ports I’ve seen.

The beaches surrounding it were dark colored. Not black. Just a dark shade of gray. Not fine but mostly pebbled. 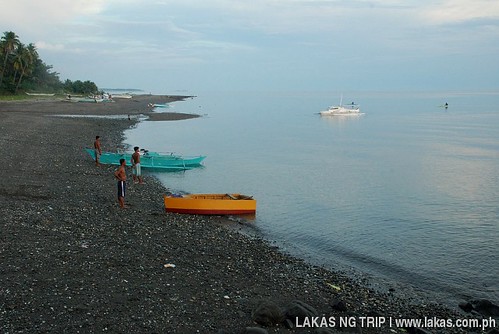 6PM came and the general color became orange. The skyline had a spotlight and everything was slowly getting dark. We watched the sunset go down as it slowly deprived us of light. 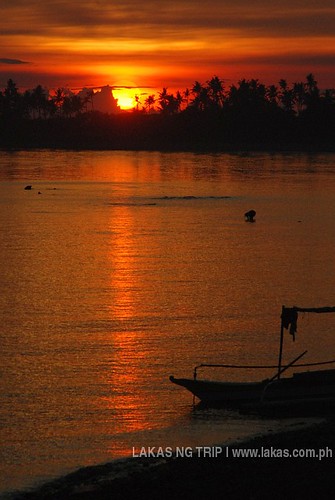 When the big yellow-orange ball had fallen down the skyline, we decided to head back to Sea Breeze Inn.

On the way we noticed this old, unlivable house. The roof was almost gone and vegetation grew inside. Nature was doing its job to bring it back to life but the house did not give in easily. It had that authoritative stature because of its thick walls unlike the modern houses of today. It was like a tank and modern car. Eventually, people told us that the original owner of the house was a high ranking Spanish officer during the Spanish era. 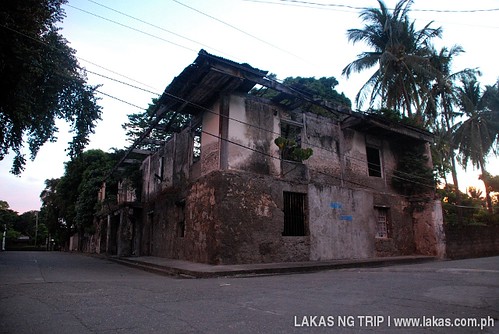 When night had devoured the light from the sky, we decided that we should go straight to the lodge to prepare for a dinner with Dazl’s cousin, Ate Vilma.

A little later at night along with Ate Vilma and her husband, Kuya Al, we were able to get inside the compounds of the ruins. The outside was just plain compared to the intricate details of the insides! There were big trees with roots protruding from the walls! It was my first time seeing such trees. Unfortunately, the opportunity to visit the old house again during daytime did not present itself so I had no picture of the inside. 🙁 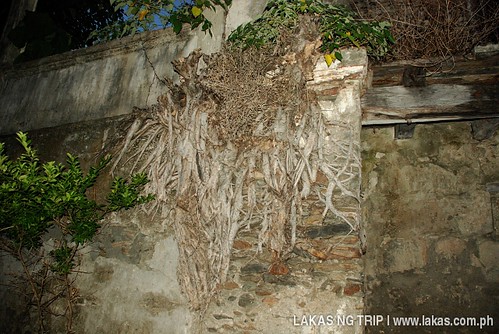 On the next couple of days we heard stories of what the old house was going to be. Plans of restoration, preservation and innovation. Some stories had plans of cutting the hanging trees on the walls, that I do not like. The trees are indicators of how old the place was. The bigger the trees are the older the place is. I hope they maintain this place as a ruins.

San Fernando to Roxas City: Tuesday and Thursday, 8AM

Roxas City to San Fernando: Wednesday and Friday, 8AM

Estimated Travel Time is 4 hours in good weather. But according to the modern day tomb raider that we met, Kate, she experienced 6 hours of a roller coaster ride.