It was around 4PM when Lai of PinayTravelista.com and I arrived in El Nido, Palawan from our short visit to Taytay, Palawan. While resting, I called Jherson of LonelyTravelogue.com, another Pinoy Travel Blogger (PTB) who was traveling in El Nido, for us to meet him. 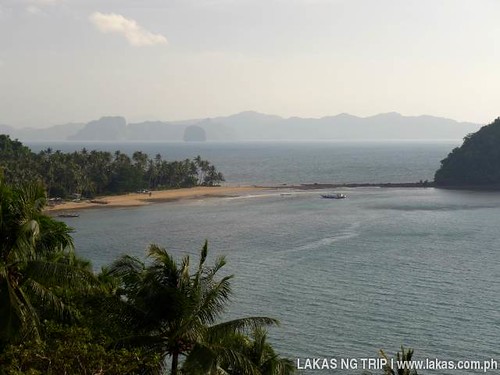 Maremegmeg Beach from the viewpoint of the National Highway

I told him that we were headed for Maremegmeg Beach and if he has time we would want him to join us. Luckily, he told us that they, along with his new found friends during his island hopping tour, will also be visiting Maremegmeg Beach. Woohoo!

At around 5PM, we decided to move our lazy butt off to look for a tricycle to take us there. The standard rate for the visit to Maremegmeg Beach is 150 Pesos/tricycle (one-way) but since we were already in Corong-Corong, the driver told us that we would only be paying 100 Pesos (one-way).

We stopped at a viewing point along the National Highway where I remember Daytripper stopped by for Lai to get a high vantage point of Maremegmeg Beach. 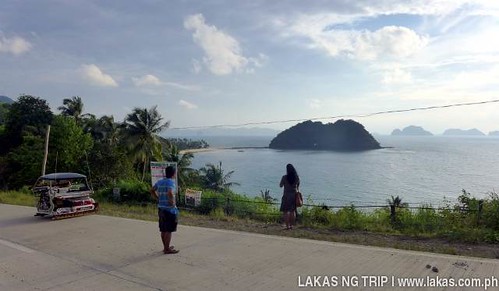 Viewpoint along the National Highway.

When we reached the intersection of the National Highway and the jumpoff point of to Las Cabañas we got off the tricycle and started walking on unpaved road. But since it was raining from the following days it was an unpaved road with muddy parts. 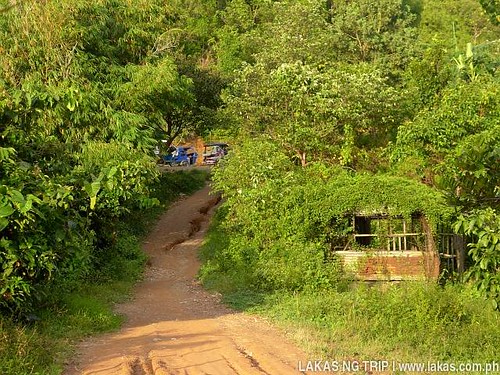 Picture from the unpaved road. The tricycles was where we started our walk to Maremegmeg Beach. 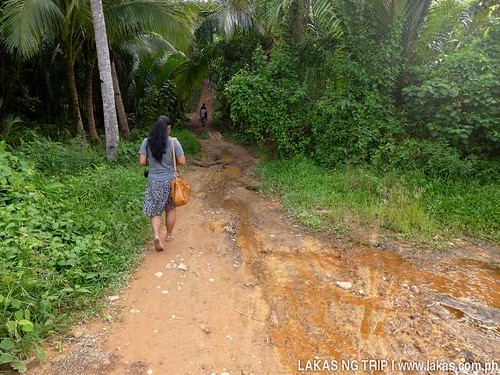 Some parts are muddy due to the recent frequent rains.

We reached a fork and lucky for us that there were some locals on that part of the trail and we asked where to go. She said just go straight up. 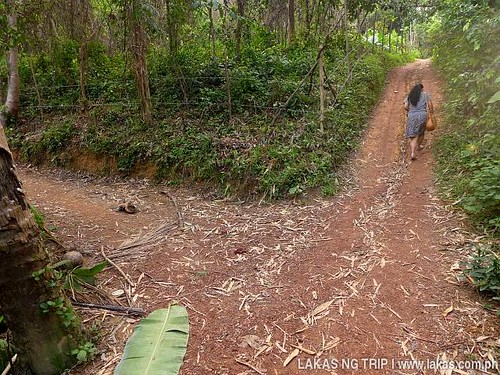 The fork going to Maremegmeg Beach. Get the one going straight uphill. 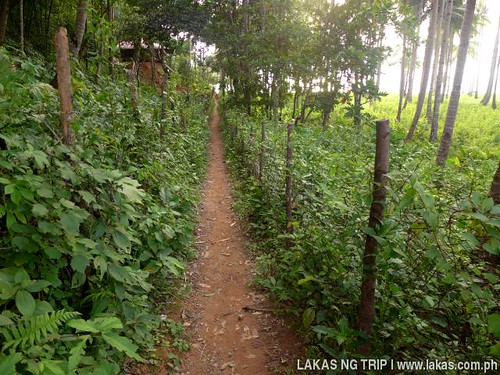 And when we got out of the trail we ended up in one of the nicest beach I’ve been to in El Nido. Yes, it’s my nth time in El Nido and this is the first time I’ve visited Maremegmeg Beach. 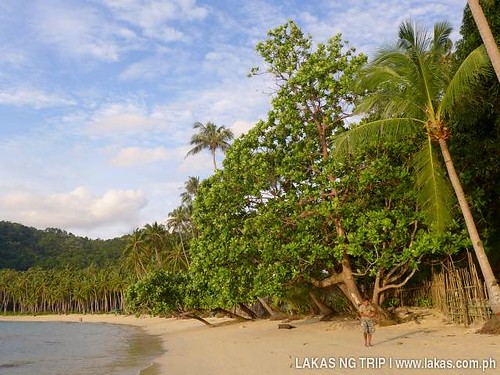 Fine sand, almost white and the sunset was starting. We continued taking pictures as we slowly walked to the sand bar that connects Maremegmeg Beach with a nearby island. 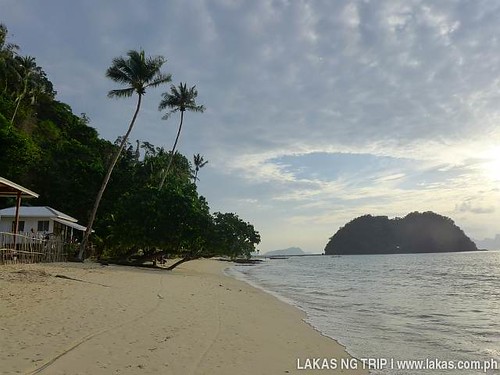 The island that we were trying to get to.

What I loved about Maremegmeg Beach was that it was still not abused by developments of resorts and accommodations. Though development is underway and I can see that it was heading towards the direction of being abused as developments were on the side of the beach. No buffer zone of plants.

There were parts that rocks would create breaks from the sand. 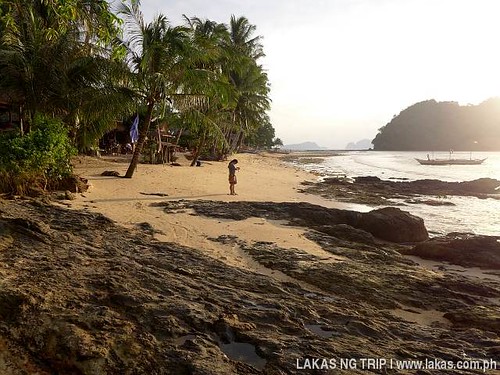 There were accommodations like the Orange Pearl Resort & Resto and Las Cabañas Resort. I’ll try staying on one of them on my next visit to El Nido. 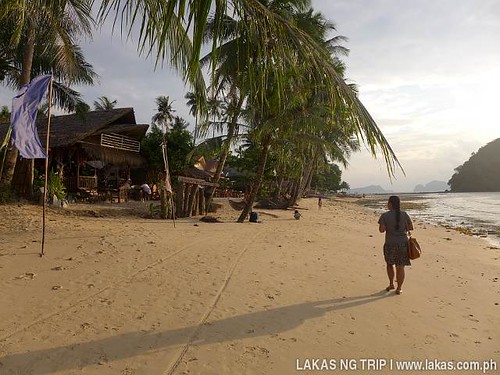 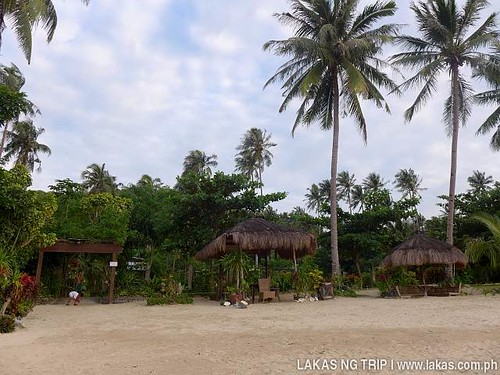 When we reached to the point where we could cross the island. We already saw Jherson but priorities have to be set as sunlight was slowly going away. Photos were taken but from the small island that is connected with Maremegmeg Beach our attention was now focused on a bigger and grander limestone cliff island away from the beach. 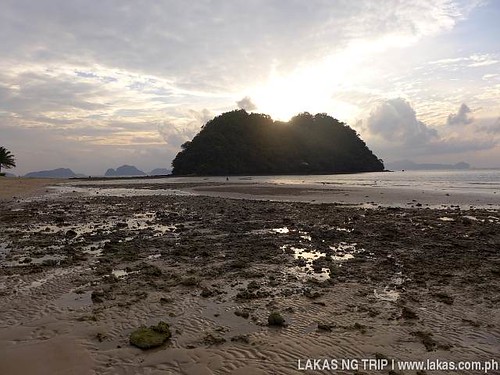 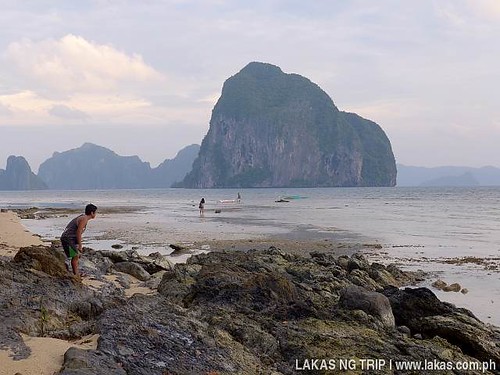 Jherson and the bigger and grander limestone cliff island 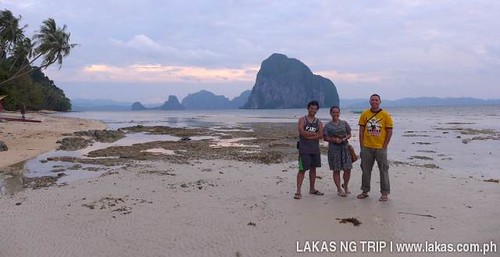 After the photo we realized that the sun was already down and we failed to take a photo of the sunset. But it was cloudy so there was no sunset. Phew!

We then met with Jherson’s friends and we planned to meet again and have dinner at Gawad Kalinga Resort and Restaurant.

We walked back to the National Highway and we rode our tricycle again to the town proper of El Nido.

We started going to Maremegmeg Beach at 5PM, went to the beach took pictures and went back to our tricycle around 6:30 PM. 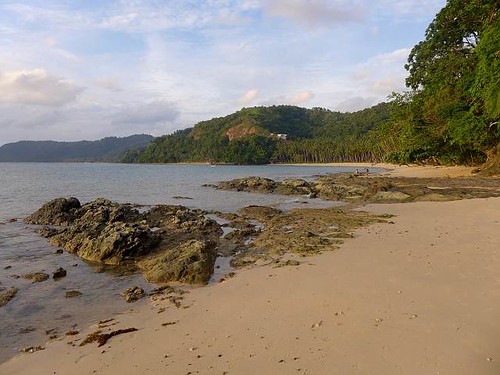 Definitely, a must visit place when you head to El Nido. I hope development would be sustainable there on the following days/months/years.

From the town proper of El Nido, you can ride a tricycle to the jumpoff of Maremegmeg Beach. A tricycle costs around 150 Pesos/tricycle (one-way). Round trip is 300 Pesos/tricycle.

You’ll meet a fork along the way, get the trail going up. The trail will get narrow but still continue walking until you get to the beach.

Our relaxed walking time was 7 minutes.

Just go back the way you came.

Best time to visit: During the sunset. Still even without the sunset it’s worth visiting there.