I’ve always asked myself why are most people more travelled around places other than their own town. Since I’ve moved to Palawan last January 2012, I’ve travelled to El Nido, Taytay, San Vicente, Puerto Princesa and other municipalities down south of Palawan but never the municipality where I currently reside, Roxas. It has been a pass by town of Palawan. 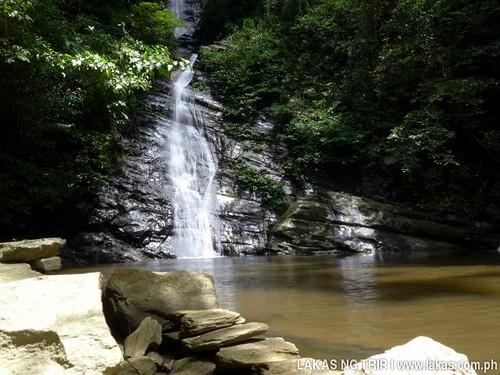 [9:58 AM] On July 22, 2013 I started my trip to slowly go around the good places of Roxas, Palawan. We started at Ching’s Buko Pie Shop in the town proper of Roxas. It’s a small canteen where they sell really good buko pie, too good that even those from other municipalities would stop by just to buy their buko pie before proceeding to their destination. But I was not there for the buko pie. I was there for their viands for us to eat at New Rizal Falls. 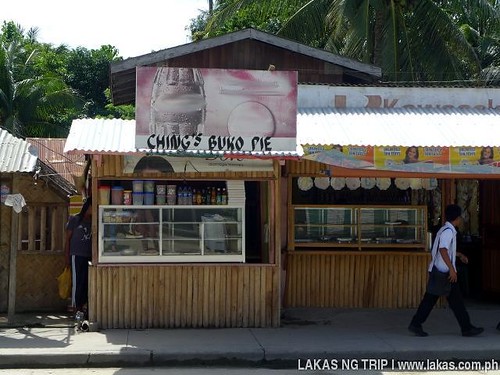 [10:06 AM] Then we started walking to the Bus Terminal of Roxas, luckily a San Isidro Bus going to San Vicente passed by and we quickly signalled to the driver that we were riding. 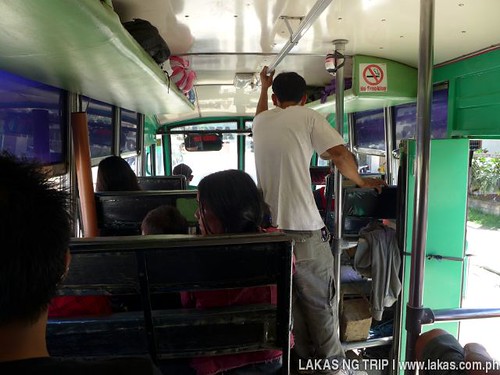 [10:38 AM] After 20 Pesos and 32 minutes on the bus with occassional stops for refuelling and getting some nipa’s and bamboo wallings on the weavers along the National Highway, we finally arrived at the intersection of Sitio New Rizal. 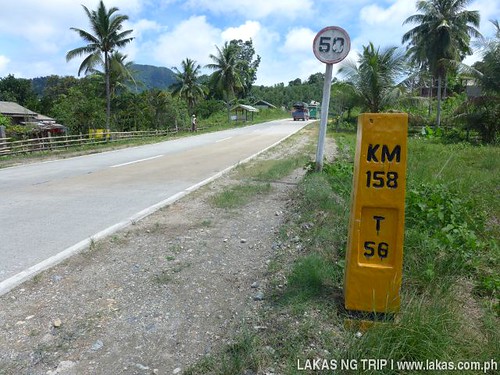 Kilometer 158 is where the intersection of New Rizal is.

There was a temporary sign made of illustration board that says the direction of New Rizal Waterfalls. We followed it and walked to the unpaved road to New Rizal Falls. 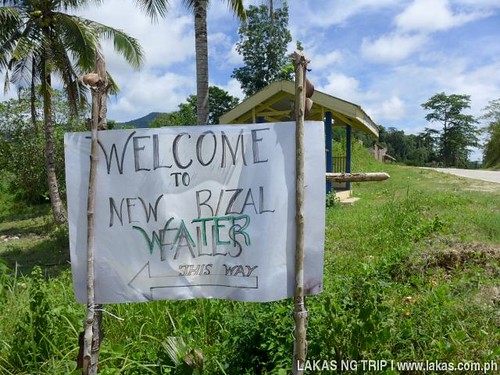 Temporary sign that points to New Rizal Falls. Note the waiting shed at the back.

It was a hilly road that would sometimes be muddy due to the earlier rain. 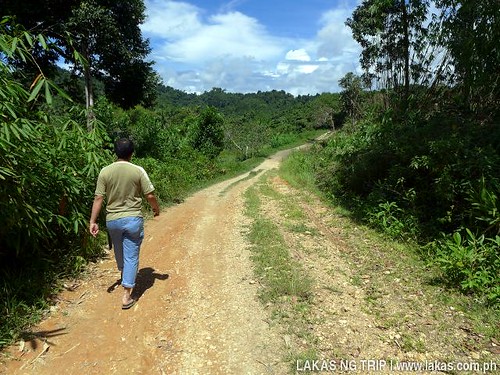 [11:05 AM] We encountered a three-way fork. The middle goes upward and both left and right goes down. On my first time here back in November 2009, I did not remember there was a fork like this. We decided to take the middle one as we remembered walking up. Besides, we do not mind getting lost for a little since another goal of ours is to walk more mileage to help us flatten our belly. 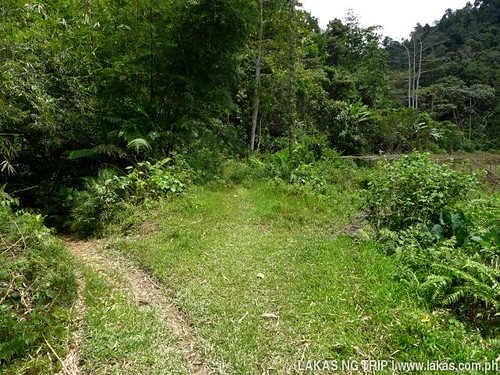 Three-way fork that we encountered. We chose the middle one.

We then crossed a totally damaged bridge, which points us to the right direction because I remember this bridge still intact last 2009. 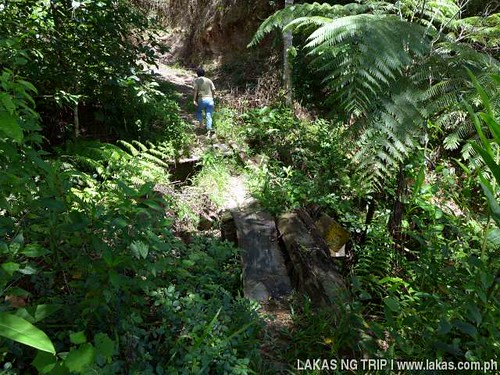 And it was all uphill from there. 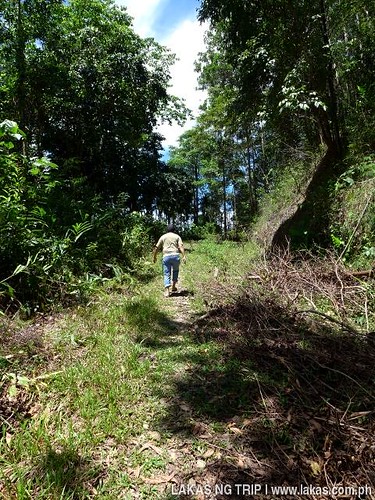 [11:14 AM] We saw these two cross on top of a hill. It was not there on my first time that’s why we were curious to get there. We traversed the side of the hill to find a trail to the cross and later there was a fork. The left going away from the hill and the other going around the hill. We decided to take the right trail and it was going up the hill. 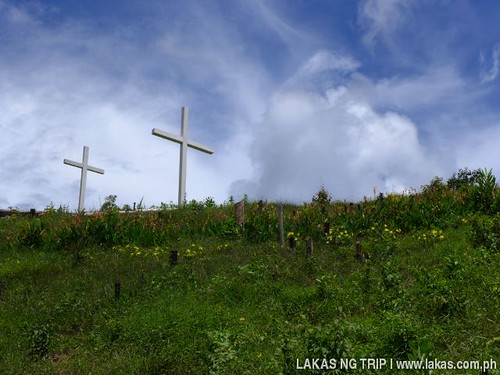 Two cross on the way up. 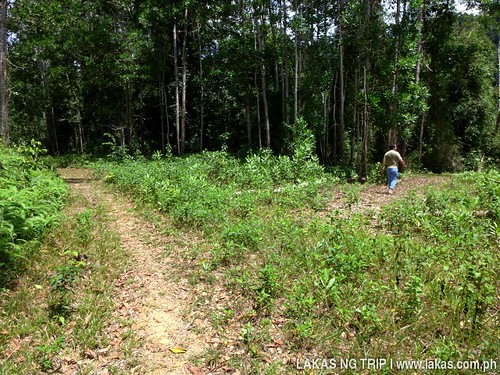 On top there was a shelter and the crosses were actually three. And the place offered a nice view of New Rizal. We decided to take a rest for a bit and enjoy the view.

Panoramic shot of the view from above the hill

Me getting near the three cross.

[11:23 AM] We decided to go down and follow the other trail. As we got deeper into the trail there were now sounds of monkeys around us. Some jumping from tree to tree. Some we just heard on the ground. Eventually, all the monkey’s were hiding from us. I was happy that they were hiding from us and not attacking us like the ones in the Monkey Trail of Sabang, Puerto Princesa. I do hope that the people who visit the falls would not give them food for them to take a picture or would leave their food at the falls, as this would lead to what was happening to the Monkey Trail. 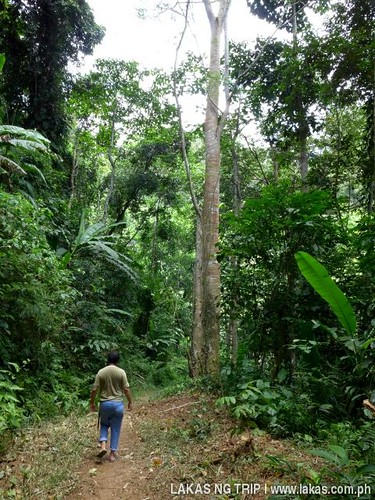 This is where we saw and heard the monkeys

[11:29 AM] After 1 hour and 9 minutes of walking, I could now see the falls and the rocks were slippery due to the flowing water. 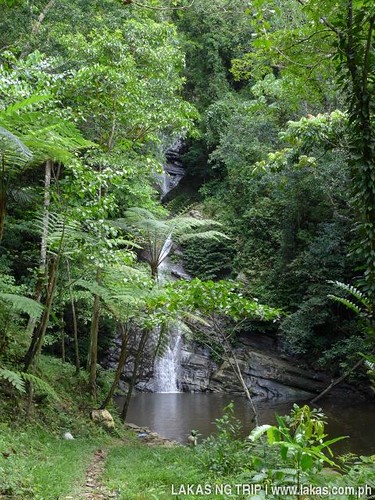 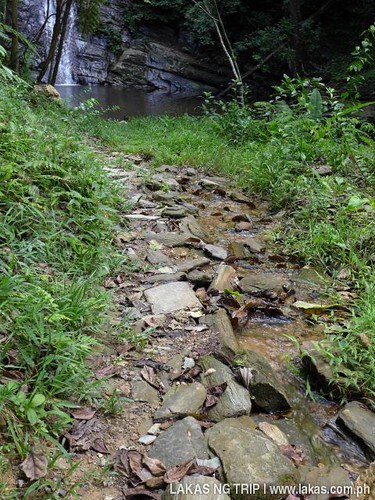 From afar I was happy to see the falls again. It was a high falls with three visible cascades from the top.

Though I liked the way they did the riprapping of rocks on the side of the falls, what I really did not like is the brown murky water of the falls. It was no longer inviting for a swim. This was due to the concrete dam that was built there trapping soil, leaves and other debris on the pool.

New Rizal Falls from the other side 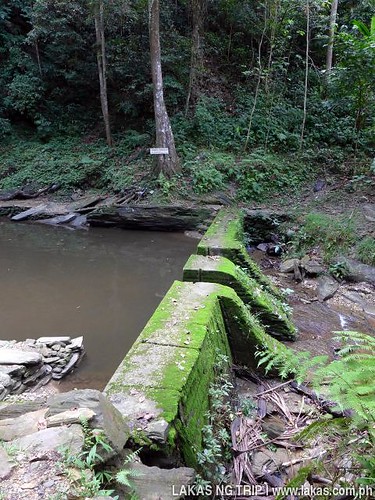 Concrete dam that traps the soil and other debris from the basin at the waterfalls.

I remember asking why the concrete dam was built before. They said that they wanted to create a swimming pool at the basin of the falls. It was working when the dam was built but on the long term it collected debris that came from the falls and eventually was collected on the basin. On our visit, the deepest place I found was only up to my hips. Therefore, the concrete dam’s purpose was not reached in the long term and was making the falls uninviting. Yes, I was disappointed.

I asked a local there what did New Rizal Waterfalls looked like when the dam was not there. He described it to me that there were a lot of rocks at the basin of the waterfalls. There was one particular big rock that he would lay down and sleep on while the waters were flowing around. The water was clear and sweet that they could drink from it.

On my first visit, my friends removed the wooden barrier of the dam and cleaned some of the debris so the water could flow out. The water then became clear and was again inviting for a swim and swim we did. 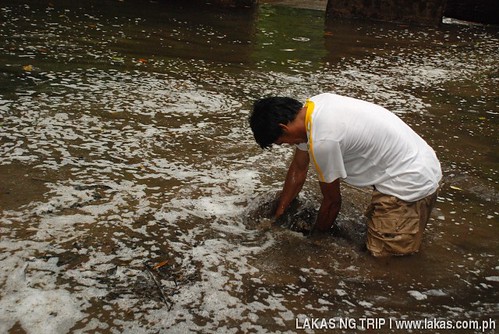 Making a way for water to pass thru directly to the opened dam breakers. There were lots of debris underneath. This was on my first visit. 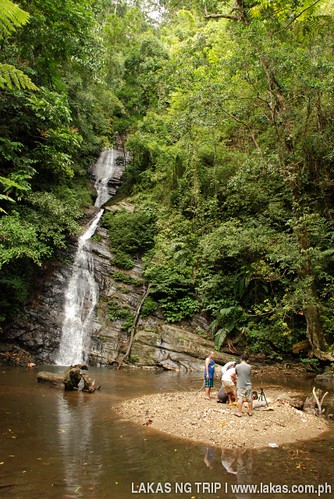 New Rizal Falls when the wooden barrier of the concrete dam was uninstalled. This was on my first visit.

Since we were there, we just decided to put our feet on the water to make us feel the cold water to refresh our tired feet. 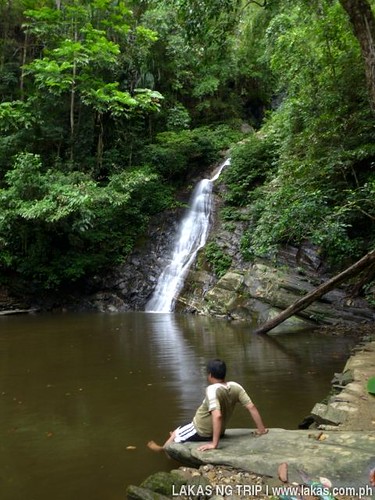 Dipping feet on the cool water

We ate lunch and after some time decided to go back. We brought all out trash back to the town proper.

[2:08 PM] Rain poured down really hard and we were forced to take shelter on a house along the unpaved road. The residents there were very kind and offered us coffee while we wait for the rain to stop. 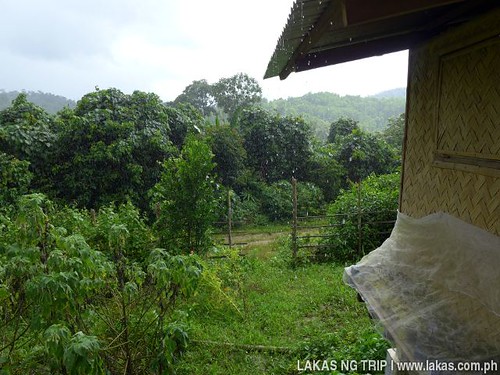 Raining and taking shelter inside a house

[3:08 PM] We were now back on the National Highway waiting for a bus to pass by.

[4:10 PM] After an hour of waiting, the same bus that we rode earlier that day passed by going back to Roxas, Palawan.

[4:47 PM] We were now back where we started, at Ching’s Buko Pie. Unfortunately, their buko was sold out for the day. 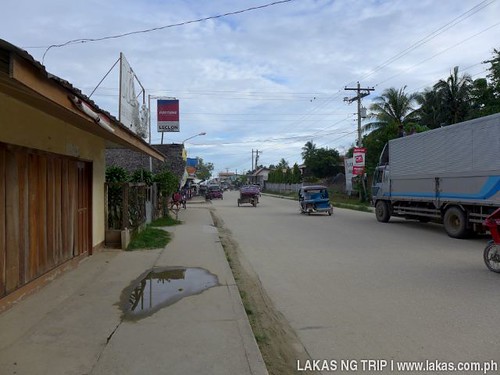 Back at the town proper of Roxas

Entrance Fee: 10 Pesos/person (Unfortunately, we did not know where to pay when we arrived there)

From Roxas Town Proper, you can ride a bus going to El Nido or Taytay. Tell the bus conductor to drop you off at New Rizal or Kilometer 158. That’s where the intersection to New Rizal Waterfalls is. Fare is 20 Pesos/person for non-aircon buses and 30-40 Pesos/person for aircon buses. Travel time is around 30-40 minutes. Buses are available from 7AM to 9PM, usually they pass by the Roxas Bus Terminal hourly.

From Puerto Princesa, ride a bus or van going to El Nido or Taytay. Tell the bus conductor to drop you off at New Rizal or Kilometer 158. Fare is 200 Pesos/person for non-airconditioned bus and 260 Pesos/person for aircon buses. Travel Time is around 3-4 hours depending on how many stops the bus would do in the National Highway. Usually aircon buses are faster than non-airconditioned buses.

From El Nido or Taytay, ride a bus going to Puerto Princesa. Tell the conductor to drop you off at New Rizal or Kilometer 158. Fare is 200 Pesos/person for non-airconditioned bus and 230 Pesos/person for aircon buses. Travel Time is around 3-4 hours depending on how many stops the bus would do in the National Highway. Usually aircon buses are faster than non-airconditioned buses.

From the interesection of New Rizal, walk on the unpaved road. Our walking time is 1 hour and 9 minutes. Depending on the physical fitness of your group this could be faster or slower.

Motorcycles could go up to the three-way fork.

Walk back to the National Highway and wait for a bus to pass by going to Puerto Princesa or El Nido/Taytay. Buses and vans passing by are from 6AM to 9PM, usually every hour.