Location
Contact Number
How To Get There
Take-Out Menu

My brother and I arrived at Puerto Princesa, Palawan at around 8:30 AM last September 29, 2010. My brother went looking for a tour group to the Underground River while I went to a local government office. We both finished our tasks at around 11 AM and were hungry.

According to the locals the majority of the good places to eat were in Rizal Ave. (the street in front of the airport). We decided to head for Junction 1 (Rizal Ave – Fernandez Ave Intersection) and walk going to the airport and the first recommended restaurant we see is where we will eat.

Unfortunately, one of us was being called by nature inside the jeep (I’m not going to say who)Â  we decided to go inside the first establishment that we see. And that is how we ended inside Noki Nocs Savory House.

Noki Nocs Savory House is an air-conditioned establishment, it had a cafeteria/turo-turo feel. Since I was in Palawan, I got interested in Kinilaw so I ordered one. It was delicious! I had fun eating my Kinilaw.

My brother ordered Liempo but he says that it did not taste good.

How to get there: Noki Nocs is accessible via tricycle within the Puerto Princesa City. If your coming from the city proper the fare would be P7 per pax.

Click on the image to view a larger version of Noki Nocs menu. 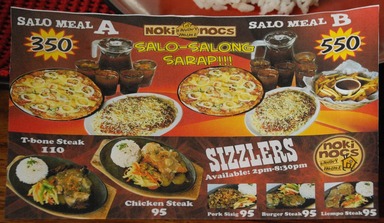 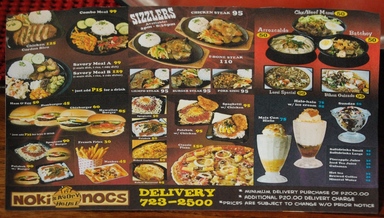