Click here if you do not want to read my story and go straight to the details of the cheapest lodging in El Nido.

Believe it or not, my lodging in El Nido only costs 300 Pesos/night/room.

When I went to El Nido I broke one of the important rules of traveling and that was to Research, Research, Research. I admit that I went with a mindset that El Nido was a popular expensive tourist destination in Palawan. Being a solo traveler that could not share the expenses with someone else and with a budget that could only handle lodgings that are less than 500 Pesos/night I was really hesitant to go. But I said to myself “If there are no lodgings that could fit my budget then I would sleep on the beach and just hug my bag for it not to be stolen.”

As I went down at the Lexus Shuttle Service station in El Nido, I asked around what’s the cheapest lodging in the area. The people answered that the cheapest was 600 Pesos a night good for 2 pax. I felt relieved that it was lower than what I expected (P1,500/night/room) but it was still not within my target budget. I said to them my situation and finally one gave-in and said that there was a 350 Pesos/night lodging and it was just beside the station. 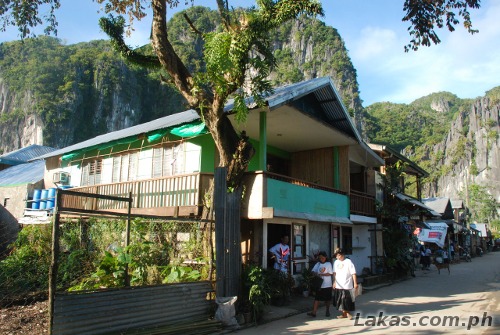 The front of Tay Miloy’s Inn

I hurriedly went to where they pointed me. I only saw the sign “Rooms Available” outside the house but there was no sign board of the name of the lodging. I went in and asked how much was their lodging just to verify and they said 300 Pesos/night/room. JACKPOT!