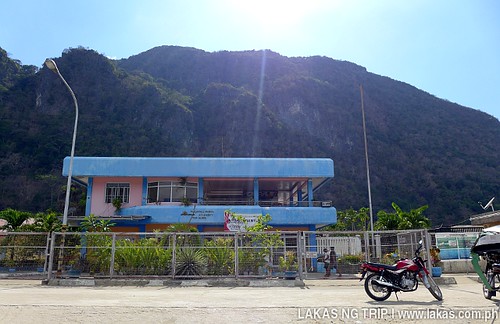 I quickly checked some flight schedules, packed my computer, secured it on my lodge and quickly navigated myself to Yaposan Beach before the tide goes up again.

Locals told me that I should go around on the road headed to Cabigsing to get there, but since it was lowtide they told me to just go down the beach at the back of PPA and walk by the beach to get to Yaposan Beach. 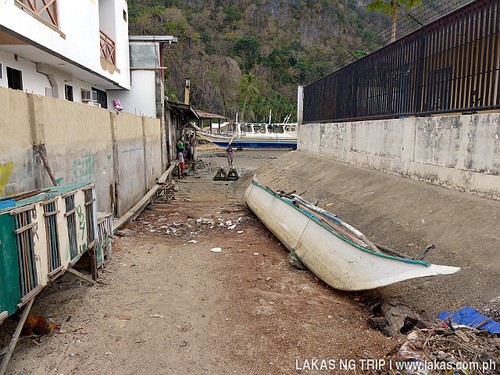 The route to Yaposan Beach on the back of PPA

Though I can walk straight to the rocks of Yaposan Beach, I decided to walk by the cliffs to see what people are doing there. 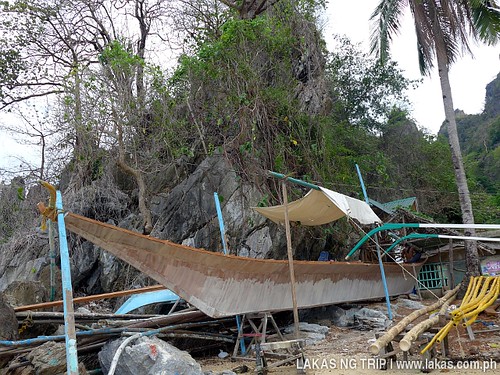 Boat being constructed near the cliffs 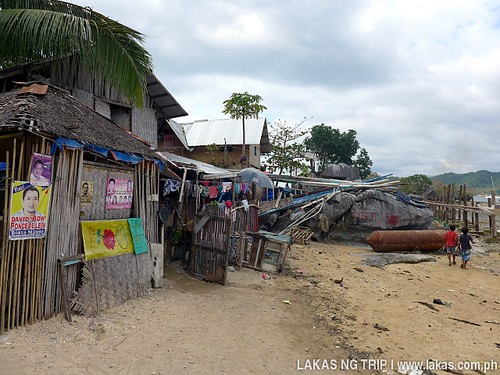 There was a bridge being constructed to the rocks of the beach. I asked the people who were working on it on the name of the place, that’s where I learned it was called Yaposan Beach, and it’s in Sitio Tandol. 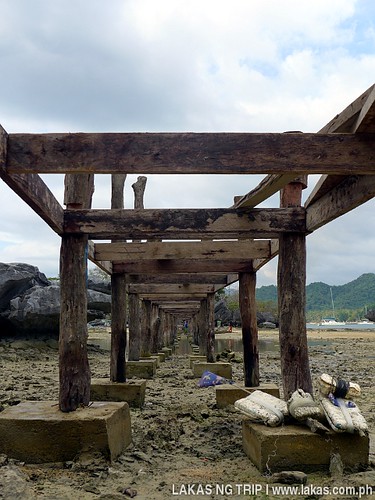 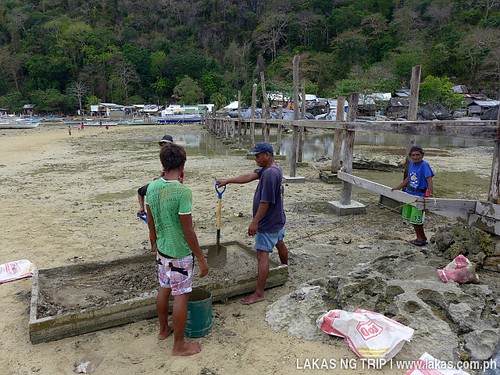 They also told me that they were constructing a bridge for visitors to get there even during high tide. They also had plans of constructing another bridge on the other side of Yaposan Beach where the end would be where visitors could jump from a high point.

There’s also a plan of constructing a cafe on top of the rocks. Personally, I like the big rocks as it is. Adding a cafe on top may destroy it’s beauty. Let’s see how it goes on the summer.

One thing I hate about going to Yaposan Beach was that I was alone! There’s so many places where I could go up on the rocks and have a nice picture. It would have been great if I was with a group of friends so I could take pictures of them on the rocks. 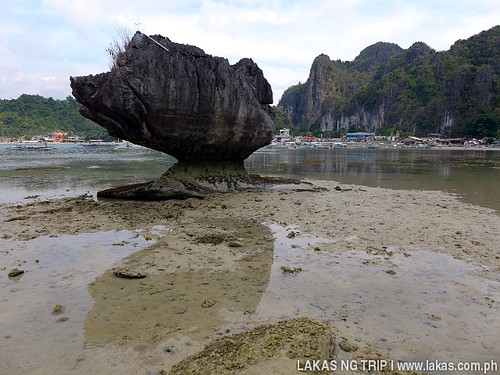 A rock on Yaposan Beach. Background is the town of El Nido 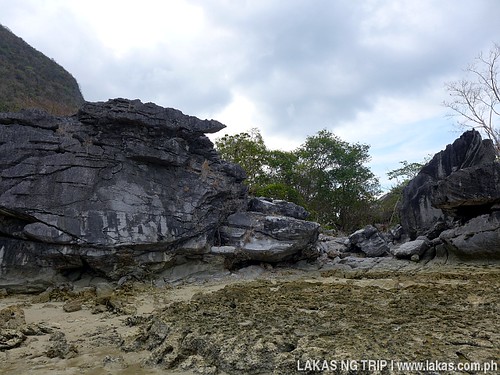 Panoramic shot when I went up to one of the rocks 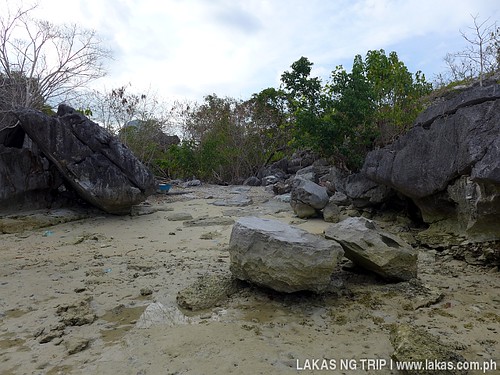 I decided to go exploring more by going around the rocks or “island”. There was a portion where I was walking on sea grass and the way the waters have etched the side of the rocks felt like I was in the death island in the movie Life of Pi. (It may just be me.) 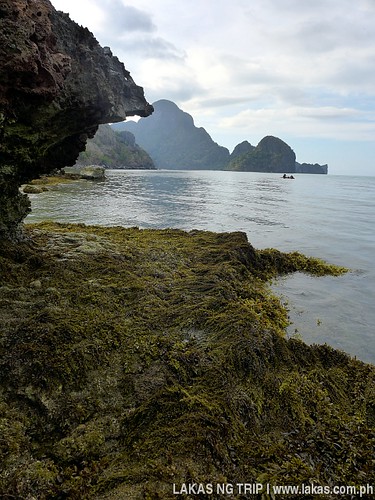 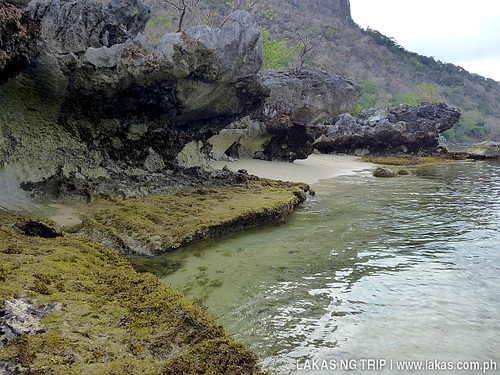 There were also many small fishes on the water. 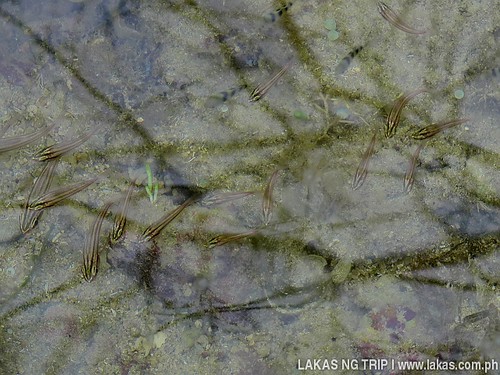 Soon I was joined by some children who were looking for some shells, small crabs and a type of sea grass. 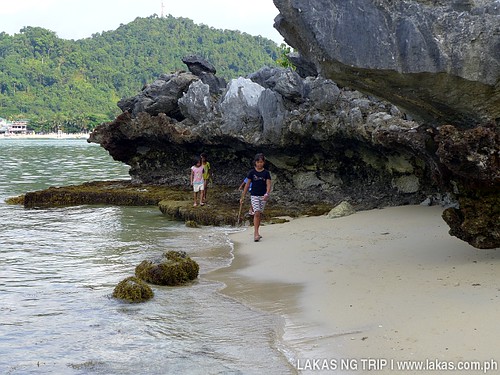 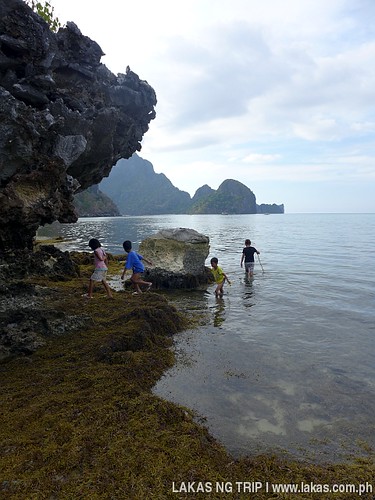 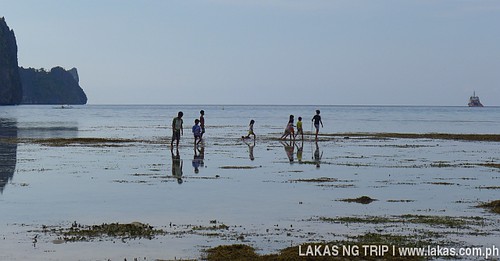 Panoramic photo from the other side of Yaposan Beach

I tried again to climb on another big limestone rock but I had a hard time because it was steep and there were a lot of sharp parts. I lose my footing I might end up hurting myself, badly. So I decided to just get quick photos and go down. 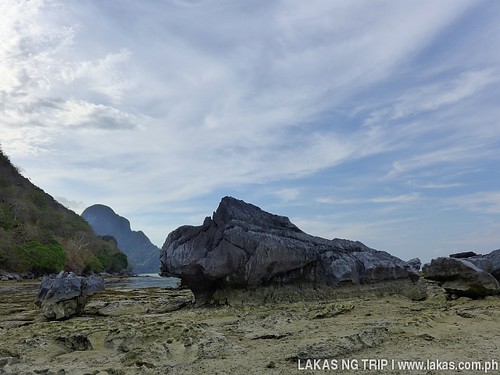 The big rock I tried going up to… 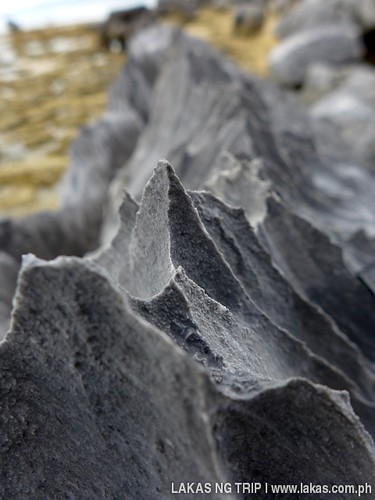 It was around 4:55PM when I decided to go back since I needed to ride the bus going back to Puerto Princesa at around 6PM. And I still have not packed my stuff! 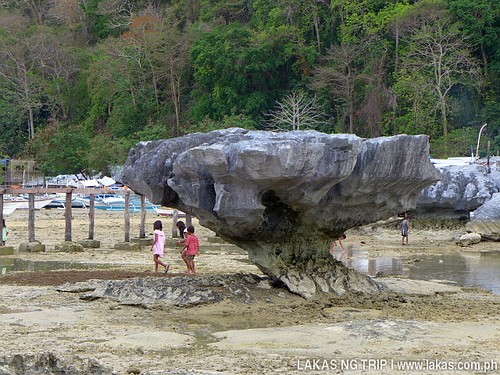 That’s why I decided to take the low tide route straight to PPA to go back to town. 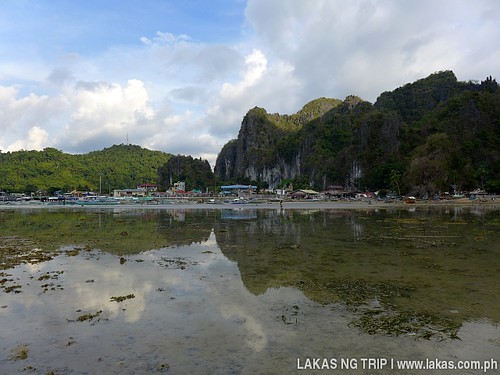 View of the town of El Nido from Yaposan Beach. My route is just straight ahead.

From the town of El Nido, Palawan ask around on how to get to the Philippine Ports Authority (PPA).

During low tide, you’ll have to go down (there’s a wooden stair for you to get down to) by the beach at the back of the PPA Building. You can walk straight to the group of rocks of Yaposan Beach, but I suggest you walk through the side of the beach where there are houses to see what people are doing there.

During high tide, you’ll have to navigate through the road from the PPA Building. Ask around on how to get there. You’ll be able to cross to the Yaposan Beach (which is now an island) by going side by side the bridge. When I looked at the people passing by there during high tide the waters were about above knee deep.

Just walk back the same route as your went there.

Please do not throw your trash anywhere in Yaposan Beach or on the community that you will be passing by. You’re just a passer by. Be a responsible traveller. For organizers, you are responsible for your group. Leave No Trace.